Out of the Abyss and into the Rage of Demons

It was dark when the raid occurred – unnaturally so!  Screams of terror erupted, dark shadows danced in and out of the fray.  Flashes of magical purple fire light up the melee and elves as black as midnight with long white hair and glowing lavender eyes met your gaze just before you were hit by two or maybe three crossbow bolts.  The poison was strong and you succumbed to its drowsy sleep.  Wakened at intervals long enough to be fed some watery mushroom soup which must have been laced with the same poison as you were unable to get your bearings in the deepening gloom as you were being carted off to the depths of Fearun. 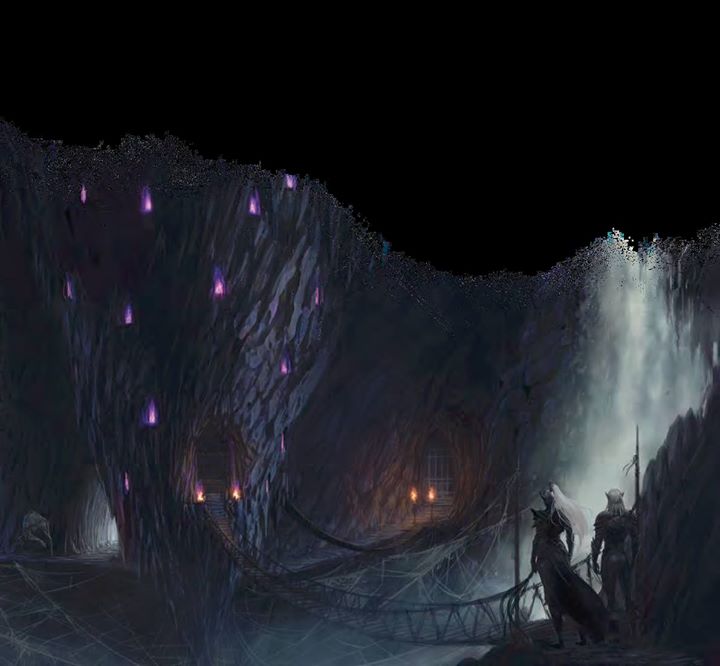 The Underdark is a subterranean wonderland, a vast and twisted labyrinth where fear reigns. It is the home of horrific monsters.  It is a realm of endless labyrinthine tunnels and caverns where the sun never shines. The Underdark is filled with races and creatures too numerous to count or list, and foremost among these are the dark elves – the drow. Hated and feared even by their fellow dwellers in darkness, the drow raid other settlements in the Underdark as well as the surface world, taking prisoners back with them. Rendered unconscious with drow poison, then collared and shackled, these prisoners are eventually sold as slaves or entertainment in the dark elves’ subterranean cities.

You have had the misfortune of falling to such a fate. Captured by the drow, you are a prisoner at one of the dark elves’ outpost, awaiting transportation to Menzoberranzan, the City of Spiders. Whether you came into the Underdark seeking knowledge or fortune, or were just in the wrong place at the wrong time, you were ripe prey for a drow raid.

Scars of the Underdark Comments

I'm sorry, but we no longer support this web browser. Please upgrade your browser or install Chrome or Firefox to enjoy the full functionality of this site.